We flew into Murun this afternoon on our way to Khuvsgul National Park. A small deviation brought us to the collection of carved deer stones at Uushigiin Uver, believed to be 2500 to 4000 years old. The stones include carvings of deer, archery items, the sun and hunan heads.

The goats and sheep could care less. 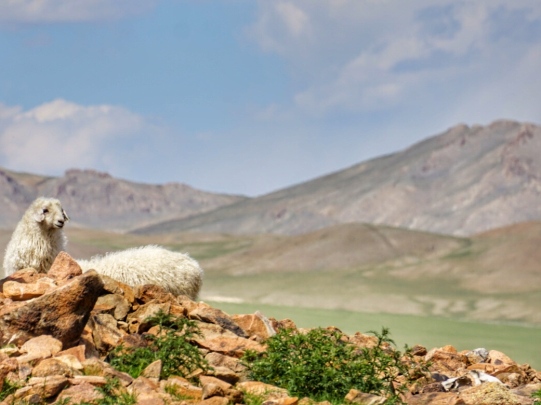 We arrived at Lake Khuvghul around 7.00 pm in time for dinner, and the first guests of the season at this camp. 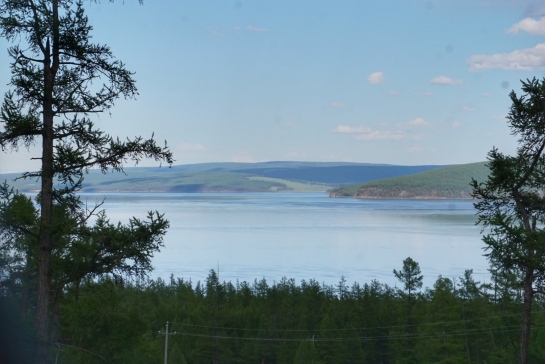 In a small place called Tadam they held the first of the seasons mini-Nadaams in readiness for the big games carnival in Ulan Bataar next month. Over three hours we were treated to wrestling bouts, archery and horse riding. Throw in some dancing and singing and crowd participation and that makes for a fun time. 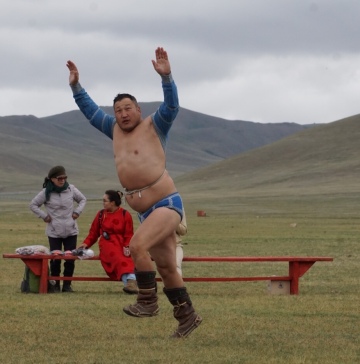 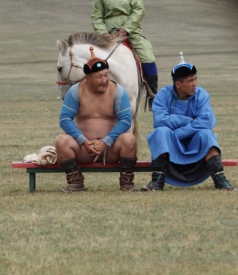 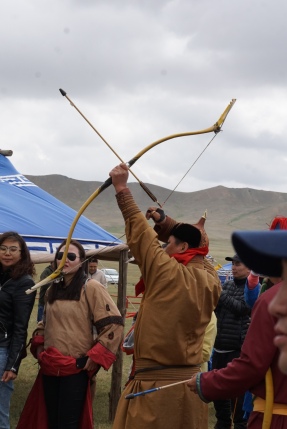 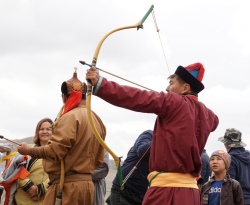 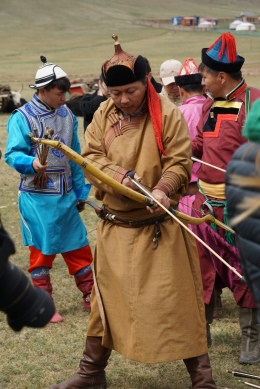 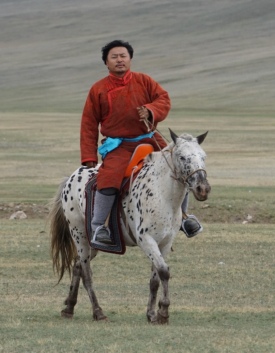 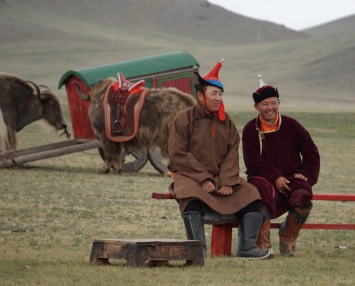 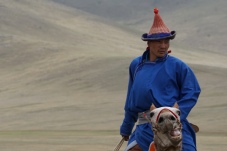 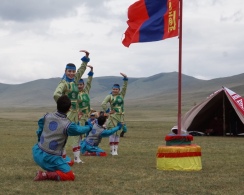 Another small homestay last night with three gers. The central ger was decorated in Kazakh style and it’s where we ate dinner and where the owner, drivers and travellers sleep. The woman who runs this homestay is very cool. She also knows the value of brewed coffee at breakfast time.

After dinner a carload of people turned up in what turned out to be a joint effort to straighten the ger frame that had moved in heavy winds. 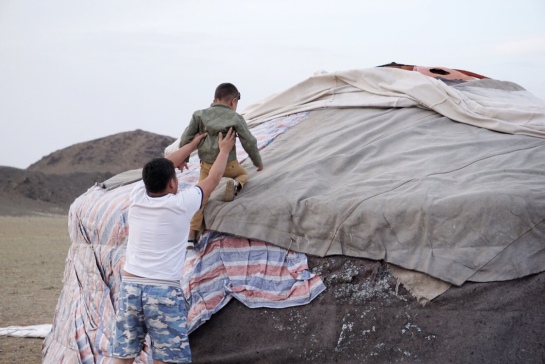 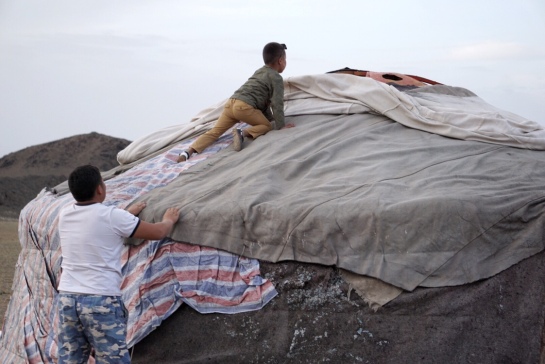 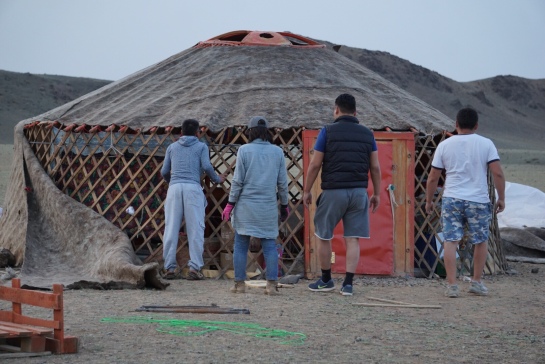 It was fun to watch. The final coverings were replaced well after the nine o’clock sunset and well after we went to bed.

After a few hours driving through the Gobi’s changing scenery we took a walk through the rocky cliffs that form this canyon, where the ice holds on in parts of the valley floor way into summer.

A few vultures were spotted high in the sky and most birds and wildlife were too quick to catch. Herded animals however were in large supply in this national park. The rabbit-like animal is a pika. 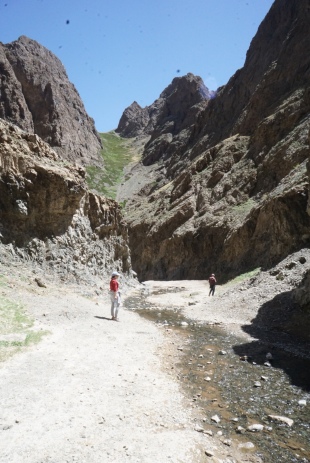 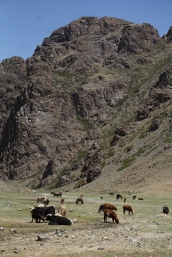 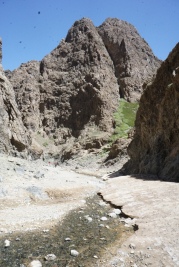 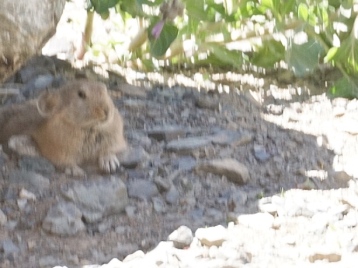 Khongoryn Els – the largest sand dune in Mongolia. Persistence paid off for Himself who managed to climb to the top in just over an hour. On the slide down he also made the dunes sing with the movement of sand in front of him. 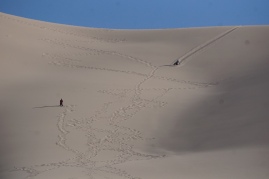 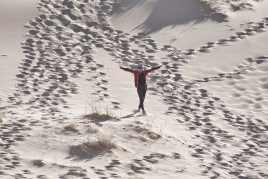 That was the day’s highlight for him. As for me, I had my first shower for a few days. Sheer luxury.

Here is our driver and guide with Rob perusing Monday’s route.

The word Bayanzag means “rich in saxual shrubs” and the plants serve the purpose of drawing water to the surface assisting to make this landscape habitable.

An American palaeontologist called Roy Chapman Andrews coined the phrase Flaming Cliffs. The area is known for the number of dinosaur bones and eggs excavated here. 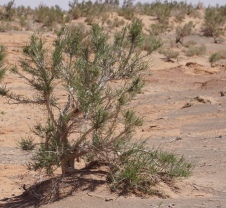 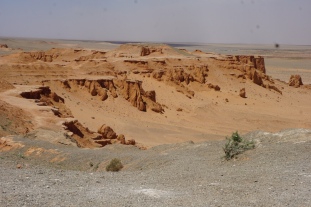 Our home for the night was a very small homestay with a walk across the Gobi to the toilet and wash tap.

We took an afternoon walk to enjoy the sand whipping around some of the smaller red outcrops.

After dinner we learned some of the many games you can play with bone knuckles. 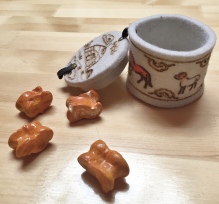 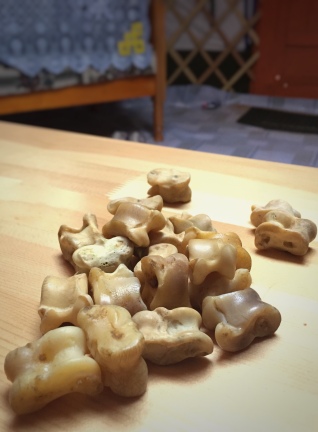 Friday afternoon and into the Gobi region. Treated to a sandstorm. 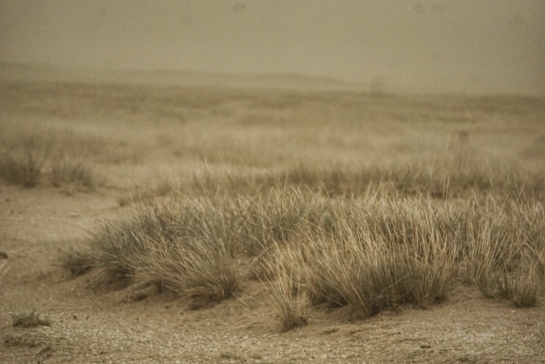 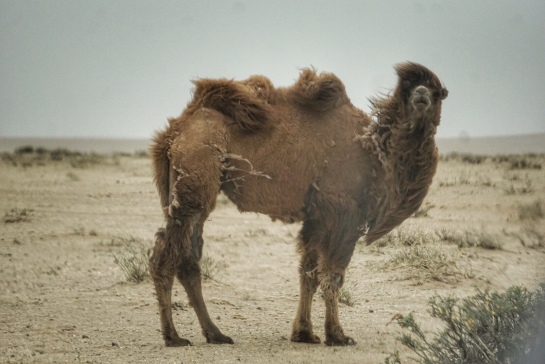 Formerly one of the largest Buddhist monasteries in Mongolia, Ongiin Khiid lies in ruins except for a new temple rebuilt in 2004. Stalin’s cohorts destroyed the site in 1939. 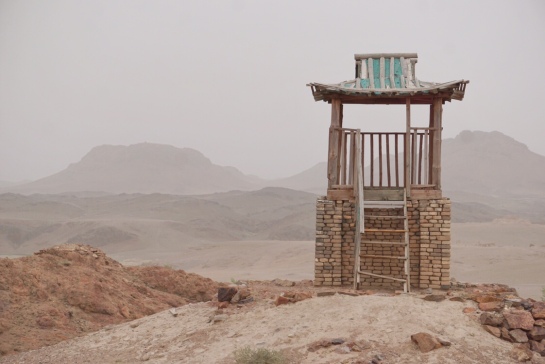 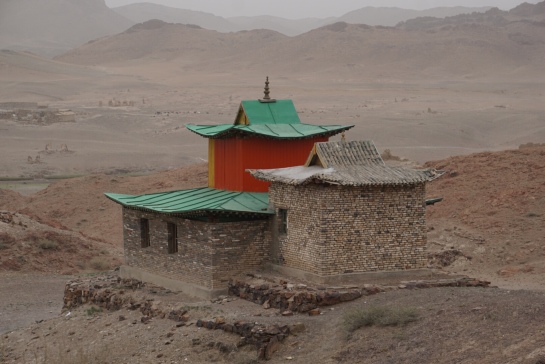 I know of nowhere else in the world where complete strangers can come to the door and be welcomed in and offered hospitality.

Friday morning on our way into the Gobi, we met a nomad couple and their grandson. A neighbour was there too as they watched a Nadaam being televised from Inner Mongolia. They have been on this site for two weeks and will move again when the sheep, goats and cattle need fresh grass.

On the stove was “a meat dish” which was subsequently identified as sheep testicles. It looked like a favourite snack of the men as they chomped into them.

We took a photo of the grandson and produced a tiny print via Polaroid’s phone app. We asked if they would like a group photo. Yes was the enthusiastic answer as they dived for their traditional clothes to wear for the shot. We left them with the photos and a tin of biscuits. They left us a lasting impression.