Today we visited three UNESCO World Heritage Sites in the Shirakawa-go and Gokayama districts in the mountains between Takayama and Kanazawa.

Due to seasonal road closures we had a little ‘go back you are going the wrong way moment’ on the way to Ogimachi, passing a group of road maintenance workers on their morning break. They did not bat an eyelid as we drove past them and around the hairpin turn to the gate across the road. Neither did they blink as we passed them going in the opposite direction to find a road, any road, that was open.

The thatched-roof farmhouses in a few villages in this mountain region are in a style known as Gassho-zukuri. The name reflects the shape of the roof: gassho – to join one’s hands in prayer, and zukuri – a type of architecture.

The houses are designed to cope with winter snow and their large roofs accommodate a number of floors. Traditionally silkworms were raised in the attic and salt was made under the floor. Smoke from the open hearth fumigated the thatched roof to protect it from insect damage. Here’s a taste of the each of the villages. 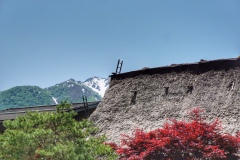 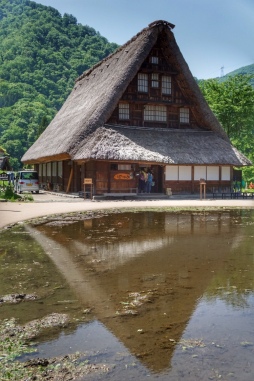 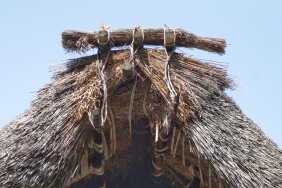 This was the most serene and picturesque of all the villages. We were fortunate to see a re-roofing project in progress. Traditionally, these tasks are collaborative and a labour exchange system called yui ensures that if you receive assistance, you must assist other villagers who helped you. This system also perpetuates the traditional methods of Gassho-zukuri roofing. Nearby, spent thatch was being used to mulch a rice field.